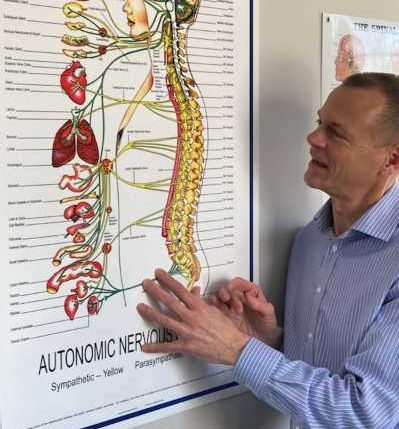 Dr. Scott Fuller, DC, is a 1984 graduate of Peabody High School (Peabody, MA). He received an Associate in Arts/Pre-Chiropractic degree from North Shore Community College in 1986 (Beverly, MA) and his Doctorate of Chiropractic Degree from Palmer College of Chiropractic in Davenport, IA in 1989. He has been in clinical practice for 31 years. He received a CCST (Chiropractic Certification in Spinal Trauma) in 1996, and a postgraduate DACNB degree (Diplomate of the American Chiropractic Neurology Board) in 2002 (not current).  He has completed hundreds of hours of post-graduate studies and thousands of hours of research.

He has maintained Fuller Chiropractic in Woburn, MA, since 1993.

A Chiropractor who “Walks the Talk”

Dr. Fuller continues to be a competitive athlete. He was a runner in high school, bodybuilder in graduate school, and has been competing in various triathlon distances since 1999, including 2 Ironman Triathlons and 2 stand-alone marathons. Currently he competes in short distance events, including sprint triathlons, running and bike races.  He earned a black belt in Uechi-Ryu Karate in 2013 and continues his study.

Dr. Fuller has delivered numerous seminars and workshops. He is available on request to speak to your business or group either in person or via a webinar.

Dr. Fuller offers hundreds of videos on a variety of topics on his YouTube channel.
Dr. Fuller has a local cable tv show, “Health Source”, which has aired for 25 years with over 330 episodes completed.
Dr. Fuller published his first book, HAPPY BACK, in 2007.  HAPPY BACK is available at Amazon, Kindle, and Barnes & Noble.
He produced two DVDs: “Learning and Behavior Disorders” and “Beginner Weightlifting”. He also produced a CD series: “Nutrition for Disease Prevention and Weight Loss.